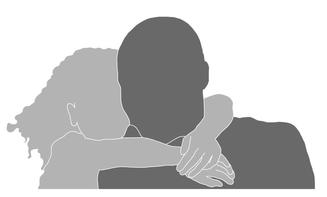 Did you Know?
Father involvement in schools is associated with the higher likelihood of student success. This was true for fathers in biological parent families, for stepfathers, and for fathers heading single-parent families.

According to the National Fatherhood Initiative; 24 million children in America, that’s one in three, live apart from their biological fathers. In urban communities, the father absence rates are closer to 80 percent. Sadly, 18+ million of these children have limited contact with their nonresident dads. This leads to a number of risks to a child’s health and well-being. There is a direct correlation between child well-being and improving the skills of fathers and helping them understand the importance of their role in their children(s) lives.
​​

Mission:
Fathers Stepping Up! Fatherhood Program (FSUF) is an initiative committed to increasing father involvement and restoring the positive influence of men in the lives of their children.

Using an evidence-based curriculum, FSUF provides a variety of workshops that empower men to take an active, leadership role that improves the overall well-being of their children. Also, men gain a circle of support and sense of community.

Goals of the Program: